Michael Monroe and his band, Sami Yaffa, Andreas Tyrone Dregen, Steve Conte and Karl Rockfist, played the Whisky A Go Go on the Sunset Strip on Thursday night.  So many bands were influenced by Hanoi Rocks and Michael Monroe proved why he is one of the most respected front men in rock!  The setlist contained Michael’s solo music, Hanoi Rocks, Demolition 23 and a Nazareth cover.  The band sounded great and Michael’s voice hasn’t lost a thing!  During the encore, Sebastian Bach joined them for Taxi Driver. 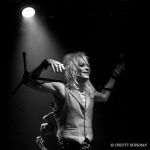