Posted on February 1, 2011 by Christy Borgman

I took the metro to Union Station late this morning with no particular plan…just to see where the day and $20 would take me. Here is my day in photos: 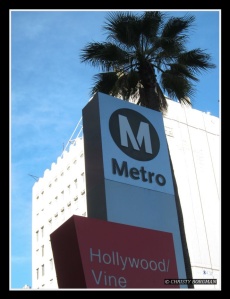 Ceiling of the Hollywood/Vine Metro station

I walked across the street to Olvera Street and walked through the Avila House and the market place.

On my way over to Broadway, I walked through Fletcher Bowron Square.

Next stop, the Bradbury Building. Many scenes from Bladerunner were filmed here. 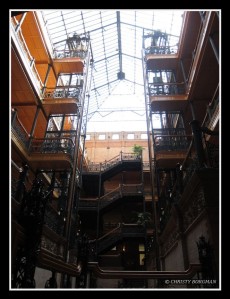 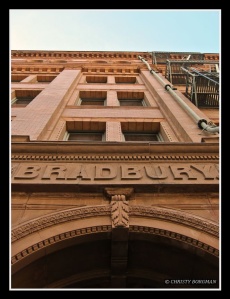 Then, I headed over to the Million Dollar Theater. I was psyched that it was open. I took a tour of this theater once with the LA Conservancy and it’s one of my faves. 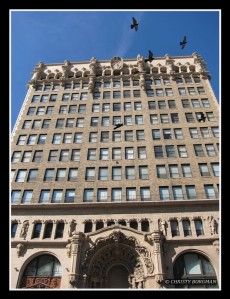 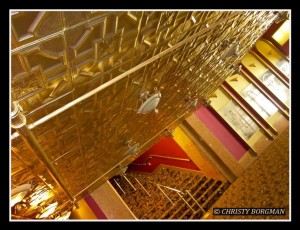 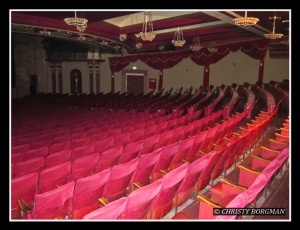 If you want to visit the Million Dollar Theater and actually see a show, this is the next production:

I cut through Grand Central Market to get over to Hill Street. This market dates back to 1917 and has a variety of food options including fresh produce and a stand that serves vegetable juice. I wasn’t hungry yet, so I didn’t eat here.

I headed over to Angel’s Flight…a very short funicular railway. The original Angel’s Flight opened in 1901 and ran until 1969. After dismantling, relocating, reconstructing and an accidental death, you can finally ride Angel’s Flight for 25 cents. The current Angel’s Flight is a half block from it’s original site.

I walked back down the hill and stopped in La Cita… 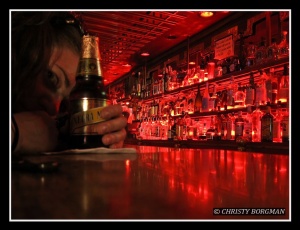 I decided to go over to Clifton’s and see if they had anything veggie that I could eat. 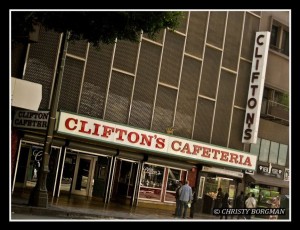 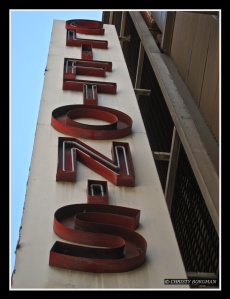 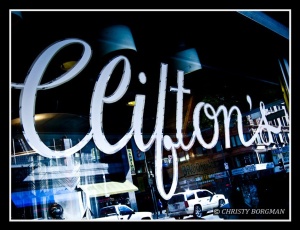 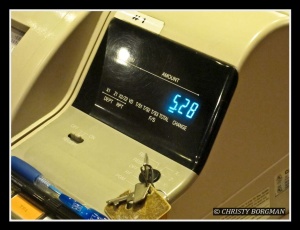 For $5.28 I was able to get broccoli, kidney/garbanzo bean salad, fresh beets and cucumber salad! (water is free)

I love the lodge atmosphere! This is a great place for people watching!

Down Broadway towards 5th, I passed the Los Angeles Theater…another beautiful building!

Charles Bukowski drank in many bars in downtown Los Angeles. King Eddy’s is one of the few that is still operating. 5th and Los Angeles St. 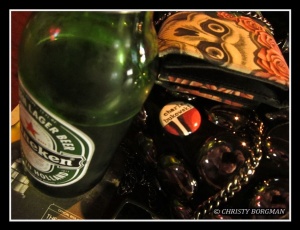 I walked around the Fashion District but didn’t see anything that caught my eye, so I headed over towards the Central Library.

On my way, I decided to take a peak in the Millennium Biltmore Hotel . I’d never been inside, but knew that it was home to the Oscars in the 30s. 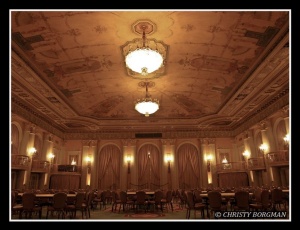 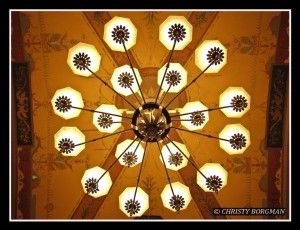 The library was closed! (Sunday and Monday), so I went across the street and walked up the “103 steps” that connect the Financial District and Bunker Hill.

I walked down Flower and went to see what the 505 plaza had to offer. It was mostly a big foodcourt…with a Post Office, Dry Cleaner and dentist… 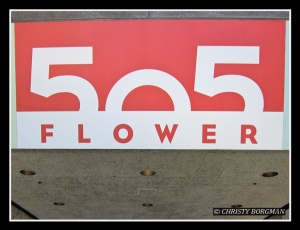 Not much to see here, but I did like this sign: “Do one thing that makes you happy. Be true to yourself”

I love the architecture of this building at 5th and Hill!

My legs were getting tired, so I headed to the closest Metro station and headed back to Hollywood.

Riding on the Metro…